James "Jimmy" Grant Ellison, who has the nickname 30K, is an operator of the Ghosts. He is in the same squad as John Kozak, Pepper and Ghost Lead Cedrick Ferguson.

30K was part of Operation "Take Down Overlord". He dropped a grenade into a command center, destroying it, and then met up at the rally point.[1]

30K took part in a mission to Russia to disable six nuclear weapons on Sokolov's base. During the mission, he was chased by a drone but was saved by Ghost Lead who crashed it to the water when driving a BMP-1. A helicopter took the missiles away before they were finished.[2]

For their mission to Bolivia, 30K and his squad were tasked with finding and extracting a mid-level gun-runner named Gabriel Paez. The Ghosts believed that Paez had information that could help them discover who was behind the nuclear bomb that decimated Joe Ramirez and his Predator Team. During the mission, Paez panicked after the Ghosts came under an ambush at the LZ and tried fleeing the area. Paez was intercepted and captured by the hostiles, but was rescued and escorted by the Ghost team.[3]

After completing their mission in Bolivia, Hunter was sent to Zambia to locate a weapon shipment that was sent to a local warlord, Dede Macaba. The team put their optical camouflage technology in use for the first time in this mission, and used it extensively when following Macaba and quickly navigating through the refugee camp. The team dispatched Macaba after learning the location of the shipment and moved to the site in hopes of boarding the plane it was on. However, Hunter was too late in getting to the shipment, and the plane carrying the shipment attempted to take off and Hunter responded by destroying the right side engine via small arms fire. They succeeded, and the plane crashed about two kilometers away, where Hunter tracked down the black box and evacuated after an intense firefight.[3]

The team then rescued an agent of Central Intelligence Agency, Officer Daniel Sykes. Following up on Sykes' intelligence, the team captured a Russian weapons dealer hiding in Peshawar, Pakistan.

He, along with other members of Hunter Team, assisted the Russian President in retaking his country after the Raven's Rock coup, striking at an Arctic weapons base and at an airport. They also assisted Russian loyalists. His team then escorted President Volodin into Moscow.

They then hunted down the coup leaders, although orders came down from on high "not to touch" "Ace". The team then left Ace on the train tracks, where he lay wounded.

30K may have also assisted in the rebellion against President Raphael Rivera.[4]

30K was part of a Ghost team led by Andrew Ross which had an operation in Columbia to rescue Delgado. At one point, he fired early. He and Ross mounted up to breach a door in Colombia, but 30K stopped him before he could launch a flash-bang grenade into a room full of gasoline canisters. Later, 30K assisted Kozak in retrieving the drone. The branch broke, and Kozak maneuvered the spare drone to catch him.[5]

In Libya, 30K was assigned to charge unto Tamer's boat, and saw the death of his informant. 30K cornered the agent on the bridge, but he shot himself.[5]

Later, 30K and the rest of his Ghost team were caught in a civil war, but they managed to escape. He and Kozak barely survived a booby-trapped warehouse.[5]

Soon after, they boarded the LCS-2, U.S.S. Independence. They and the ship's Marine contingent landed on the island hideout of the Bedayat jadeda. 30K climbed one of the buildings to provide cover with his machine gun, but was seriously injured. Several of the Marines charged the insurgents to provide cover for when Ross recovered him, and was left in the care of a Navy corpsman.[5]

Eight weeks later, he still walked with an aluminum cane, but reunited with Ross and the other Ghosts at the Liberator bar, where they were met by Scott Mitchell. The team affirmed their readiness to return to duty.[5]

During the Chelyabinsk province mission, he carried an MR-B assault rifle and a PX4 pistol.[2]

In Future Soldier, he is typically armed with a 150-round capacity Stoner 96 that has a red dot sight, extended stock & a bipod, a 30 round loaded suppressed Goblin with a 4x Tac Scope & a fixed M16 stock during recon, and a cloaking device.[3] In the mission Tiger Dust, he is armed with an M110.[3]

He teases his "little brother" Kozak about being in his "mother country." Even though, Kozak is half Russian and was born in Brooklyn. 30K, ironically, appears to be a technophobe because of his dislike for the Warhound and saying that he doesn't trust anything with batteries. Due to a sarcastic remark, the Warhound identifies him as the "Queen of England". 30k appears to dislike Sailors and Marines. He appears to be a claustrophobic, as he dislikes being in the corridors of the Russian ship. 30K and Pepper seem to be good friends, as they almost always joke with each other. He was born in 1996.[3]

He complained that Kozak had "jinxed" them once during the Yemen operation. He also likes to tell different stories about how he got the nickname, including stealing #30,000 from a warlord in Afghanistan who received it from the CIA to be an informant, in which he claims he "Spent 1000 on booze and the rest to charity".[5]

He believed that they had a right to know if their CO was right in the head. He spoke to Kozak about Ross, who told him to let it go. Eventually, Ross told him the truth about his son.[5]

He drives a red Mustang Cobra.[5]

30K is somewhat a comic relief to the Ghosts. 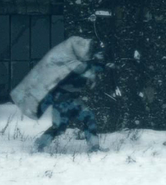