Alicia Diaz is a marksman in the Ghosts' Charlie Team. She served with Captain Scott Mitchell in the Korean War and in the Mexican Insurgency. She later joined the CIA's Special Activities Division.

Alicia Diaz grew up as a tomboy daughter of a rancher in Texas, where her family still runs a large ranch. Diaz joined the United States Army to see the world. She is interested in travel and languages, of which she speaks several. Her love of languages is a strong asset to the team. She spends most of her free time traveling in Europe and South America.[1]

Alicia Diaz joined the Army, but Army policy did not allow her to serve in any combat MOS (military occupational specialty), including special operations. However, The Ghosts did not have to follow the Army's policy given the unique nature of the unit, and the unit recruited Diaz given her background as a world-class long distance shooter. Diaz joined the Ghosts and serves in the sniper section within the unit, and is assigned to Captain Scott Mitchell's Alpha Team.

She has had tours in Afghanistan.[2]

Diaz fought with Mitchell and Alpha Team in the 2007 Korean conflict, following the sinking of the USS Clarence E. Walsh.[3]

She joined a mission led by Scott Mitchell at the Afghanistan-Pakistan border. They rescued a Special Forces medic and two CIA agents. Diaz provided cover and took out the patrolling guards using her SVD even though she preferred a silenced SR-25 or some of the other rifles. During the extraction, they were swarmed by over 100 Taliban fighters, but Mitchell was able to get her and the team away safely.[4]

Staff Sergeant Alicia Diaz was deployed along with the rest of Ghost Special Forces in order to put down the North Korean military coup in the Korean Peninsula. Along with fellow marksman Mike Kim, Diaz displayed amazing proficiency in sniping on the battlefield as she and the rest of the Ghost Recon cut off the rebels fuel supplies and stave off enemy attacks from civilian populated cities.[5]

She was later interviewed by retired Ghost Major Will Jacobs on Modern Heroes.[5]

She was assigned to Operation War Wraith in April 2012. On the trip to China on the USS Montana she met the Predator drone pilot. At Hakka Castle she was again assigned to take out the guards with her DSR-1 sniper rifle. During the extraction the team stole a boat but had to extract using a zodiac after two helicopters attacked them. At the reunion in Liberator Sports Bar and Grill, she gave Bo Jenkins a pair of her underwear as part of a bet.[4]

In 2012, the Ghosts were deployed to Kazakhstan as part of a UN task force. Diaz again went above and beyond the call of duty in the Ghosts pursuit of the dangerous revolutionary Asad Rahil. In the climax of the operation, with the better half of the Ghost team incapacitated and out of action, Diaz and her commanding officer Scott Mitchell struck out on their own and corner Rahil on the open plains, with Diaz providing recon and sniper cover for Mitchell.[6]

In 2013, while overseeing security for the NAJSA meeting in Mexico City, Diaz and the rest of the Ghosts are engaged by Mexican revolutionaries, led by General Ontiveros and his son, Colonel Carlos Ontiveros.[7]

Two weeks before the Ghost's Afghanistan operation, she broke her ankle and Mitchell replaced her with Doug Treehorn.[2]

Following her departure from the Army, Diaz joined the CIA's Special Activities Division. Some time after the Raven's Rock coup, she worked in an operation in Yemen with Ghost Lead Andrew Ross and John Kozak, Pepper, and 30K.[8]

Alicia is friendly but not outgoing. While growing up in Texas, she was often teased by her two brothers Carlos and Tomas.

Alicia joined the Army to prove that she could perform as well if not better than any man in any situation. To cement this claim, she did everything in her power to ensure the Ghosts' success following her recruitment by the special forces group. Her combat training was challenging, but following it, and a 2005 incident in Kabul that almost resulted in her being knifed to death, Alicia learned to use her cunning to compensate for her size. 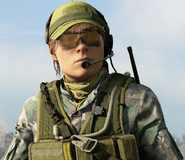