Arturo Rey is the man who leads "The Death Riders" gang inside the Santa Blanca Drug Cartel. He is a devoted member of the Santa Muerte cult, having survived a drive-by shooting in La Paz, and is planning some "apocalyptic" event with his followers.

His gang is assisted by Ghost Recon infiltrator posing as a mercenary, who he sends on missions against the Los Sin Alma gang. Rey likes to call him his "cousin" and admires his fighting prowess.

At one point, he is attacked by UNIDAD, but the gang fights off the troops away from the mountain top church.

After the Ghost gains Rey's trust, the leader will announce that it is time for his "apocalyptic" event and asks him bring him his special bike. The Ghost does so, after already stopping the leader's plan to send innocent civilians to their death as part of his ascension to the afterlife as the "Lord of Hell".

Seeing the loss of his plan as a clue from Santa Muerte, Rey states that he still needs a servant in hell and will assault the Ghost, but instead the Ghost will fight back and stab Arturo in the shoulder with a scythe. Then Arturo Rey will quote "death will only make me stronger!", before climbing onto his bike, lighting himself on fire, and driving outside.

The Ghost then quips, "that dude's on fire".

After killing him, the Ghost moves on to his next assignment after Karen Bowman congratulates him on stopping a maniac. 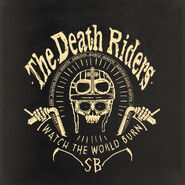 A newspaper clipping during the El Invisible briefing shows that his burned body was found in the wilderness on his bike.