Wolves
The Baal is a Titan drone on Golem Island.

Prototype designed to efficiently eliminate targets in open areas. Can be air dropped to fight as a vanguard.

The drone is airdropped by the Gargoyle drone at the large platform at the Chemical Refinery once the boss fight has been commenced.

Baal is supported by numerous Wolves, which appear from hangar doors on the sides of the platform.

Located at Sector 1 on Golem Island for Project Titan, this boss drone scans its targets and if hostile, Baal will fire all of its rockets at the target, and will also run over any hostiles. 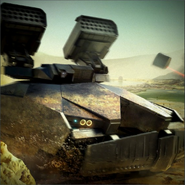 Unfinished Baal at the Prototype Workshop