Cargo Raid is the eleventh mission conducted by The Ghosts during the 2007 Korean war.

Well, Mitchell, it seems like General Paik's strategy for provoking nuclear war is even more complex than we thought. It turns out that Paik has access to a lot more nuclear weapons than we ever guessed. Major Sung has revealed to his CIA handlers the true nature of his work for Major-General Paik's faction: equipping Silkworm and Super-Silkworm anti-shipping missiles with a longer range and nuclear payload delivery capabilities. If the North Koreans pull this off, Paik can add another hundred or so nuclear missiles to his arsenal overnight.

A ship out of Liberia, the Clarabóia, docked at a North Korean military port on the Sea of Japan yesterday. Our intel is confident it is carrying the equipment needed to finalize the upgrade to Paik's missile fleet and transform obsolete anti-ship missiles into nuclear city-busters. Since officially, everything is A-OK, we can't just take the ship out, not without causing diplomatic problems. That's where you come in. Going solo and under the cover of night, take out all opposition around the base and make your way to the Clarabóia. Since Paik is not too popular in Pyongyang at the moment, we can carry out a single airstrike without causing too much of an incident. It's just one, though, so we have to make it count. Laser-target the ship, and South Korean F-16s will send her and her payload to the bottom. 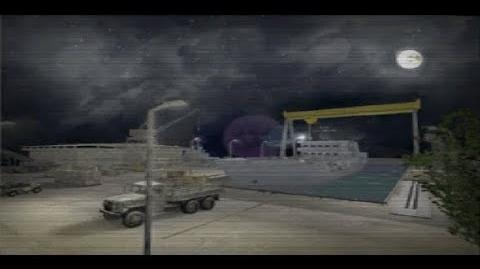 It is the second mission the XM29 is used by Scott Mitchell as his first "Lone Wolf" weapon.

The SOFLAM is again used by Mitchell to call for airstrike upon Clarabóia by laser-targeting.