The Cerberus are three prototype Titan drones encounterd on the Golem Island and the toughest of the raid bosses.

Drone prototype composed of three killer drones. Cerberus was created through a major technological breakthrough and represents the apex of Skell Technology.

Located at Sector 3 Golem Island for Project Titan, this boss drone releases a flash to blind all hostile nearby and then scans it's targets using its laser which is an instant kill. 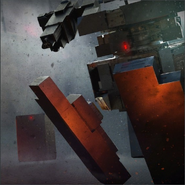