Gustavo Serrano, also known as El Cardenal, is a true believer in Santa Muerte. He uses the saint to try to make life better for people all across Mexico and Bolivia. He feels that the only way to instill loyalty is to improve the quality of life.

El Cardenal is one of the closest advisors of El Sueño, suggesting propaganda and philanthropy strategy, but also delivering sermons in Santa Blanca churches and on the radio. In charge of public image, he encourages El Sueño to hold charity events but also develop education and humanitarian NGO activities. He is the one who suggested that El Sueño write his own bible.

He was excommunicated by the church, but with the cartel's support he was able to maintain his community.

He was responsible for asking El Chido to tour the country as a morale booster.

Karen Bowman calls him and Ramon Feliz the cartel's Yin and Yang - different aspects of influence.

He works with the following buchons:

Bowman trying to persuade El Cardenal to help get Sueño.

El Cardenal prays after being captured by Nomad and his Ghost team. 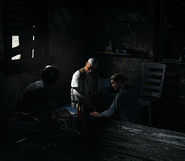