Miner for the Santa Blanca Cartel

El Wey, real name Pedro Gil, is a miner located in Villa Verde who supervises the cartel's pyrolusite mine. He serves as a buchon under El Yayo. Half of his face has been burned due to a accident with pyrolusite.

Coming from a miner’s family, he learned that profession in his childhood years. He befriended El Boquita in elementary school. They lost contact for some years when Pedro went to continue his studies in the nearest city. They met again as teenagers and El Boquita quickly offered him his first cartel job in a cocaine lab. Ambitious and curious, but not that smart, he started to experiment with the lab chemicals. He wanted to be known as the guy that would make the best cocaine in the world. But he ended up badly burning his face.

He’s the person in charge of the process of extracting the pyrolusite and transforming it in the chemical agent that allows the Cartel to turn coca leaves into high quality cocaine. He sends this agent to all The Bolivian Narco-labs. Self-conscious about his burns, he tries to compensate for it, showing a great sense of humor. Within the Santa Blanca he's known as the funny guy. But if he feels that someone is judging the way he looks, he gets violent and destroys everything.

According to Karen Bowman El Way is quite nice until someone makes a joke about his face, if done so he'll try and kill them. The Ghosts use this to their advantage and frame him for killing a UNIDAD commander called Bento who laughed at El Wey's scarred face.

And also had a low budget movie inspired by him for his scarred face but a few days after release the entire film crew went missing, most likely killed by him 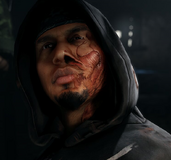 Karen Bowman threatening to burn El Way with a blowtorch if he doesn't cooperate.