Golem Island is a remote volcanic island to north-east of the Auroa archipelago and the location of Project Titan as well as the raid in Tom Clancy's Ghost Recon Breakpoint.

The island is made up of 3 sectors transitioning from an arboreal forests to an active volcano that erupts with lava.

The entrance to the island is a narrow canyon with numerous rock to which numerous wrecks have crashed. Directly to the east can a drone testing facility be found, where the Gargoyle boss fight takes place.

Wast majority of island is covered by lush forests similar to the main island. In addition to the largest main volcano of the island, numerous smaller craters are found scattered across the landscape, some of which have volcanic activity. Skell Technology as established several facilities directly into the craters. The main volcano is closely monitored by Natural Hazards Control.

The landscape around the chemical refinery to the north of the entrance is covered in toxic deposits of sulfur. The boss battle with the Baal drone takes place directly in the crater of the facility. A large sattelite dish has been also installed on top of a smaller crater to the side of the chemical refinery.

Sector 3 is completely barren of life. The 1968 eruption has left nothing but scortched remains of trees. A cold war era insallation can be found at a no man's land to the east of the caldera, which has been engulfed by meters of ash, indicating that it was buried by a pyroclastic flow. A dense fog of ash still covers the site.

A lava shield has been installed beside the main caldera to protect a scandium mine. The shield is guarded by the deadly Cerberus drone.

To the south-east near the shore line can be found the Skell Quantum Super Computer. The site can only be reached by boat (or by carefully mounting a smaller helicopter on any big enough platform).

Sector 01 and 02 of Golem island seen in the reveal trailer. Notice how the landscape is devoid of any flora and unique locations aside from the Satellite Dish. 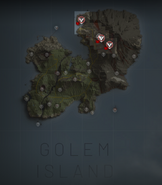