Sergeant First Class Dominic "Dom" Moretta, aka Holt, is a technology specialist in Nomad's Kingslayer Team who speaks fluent Spanish. An expert in intelligence and data decryption, he is also an excellent drone specialist.

Born on February 3rd, 1986 in Louisiana, Dominic Moretta grew up in a rural family with a long history of service. He wanted to continue that legacy and make his career in the military since the age of 4. At the age of 18, he joined the Army and became a Sapper, then an Army Ranger, before the age of 21.

Holt has always been obsessed with technology and developed a passion for engineering. This was one of the reasons he was selected to become a Ghost at the early age of 27.

Holt is not only a professional, top-tier operator in combat, he’s also a joker at heart. He uses his humor to keep the situation under control during tense moments.

When not on a mission, Holt tends to get rowdy. He is known for drunkenly pushing a joke too far and getting into regular bar fights. He would do anything to get his adrenaline fix.

After working on several missions together, Holt quickly became Midas’ best friend. He often drags him into disturbing situations, ones that never fail to create memorable stories.

Holt has seen the effect of drugs firsthand. He came from a community that was overrun with oxycodone and other illicit substances. Many of his friends and family members either died or went to prison due to drugs. For him, his mission is all about stopping that abuse from happening to even more neighborhoods. Though during Kingslayer, he mentions that he has tried cocaine and makes several jokes about the cocaine industry.

Holt was assigned to Nomad's Ghost team along with operators Midas and Weaver in their objective to take down the Bolivian Santa Blanca drug cartel.

During the events of Operation Greenstone, Holt was part of the 32 Ghosts sent to investigate the communications blackout at the Auroa archipelago. Thanks to a conspiracy, the Ghosts were lead into a trap, which resulted in their helicopters being destroyed due to an advanced drone perimeter around the archipelago.

Holt was critically injured during his chopper's crash landing, but was saved by the islands inhabinants known as the Homesteaders, who brought him to their secret base, the Erewhon.

Later, Nomad is able to make contact with Holt and is guided to Erewhon, where he reunites with Holt and tells up the fate of Weaver. Holt hands Nomad his drone and is able to communicate with Nomad about several topics. 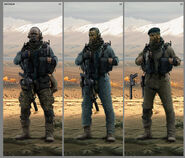 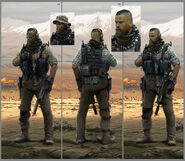