John Dmitri Kozak (commonly referred to as just Kozak) is a member of the Ghosts and is the engineer in his squad (AFO Team Hunter) that consists of himself, Pepper, 30K, and Cedrick Ferguson.

John Dmitri Kozak was born in Brooklyn's Brighton Beach neighborhood, which is also known as "Little Odessa" and "Little Russia" for its high population of Russian-speaking immigrants. His father and mother emigrated from Russia. He is also the youngest among his teammates.

He once turned in his cousin, Sergei, to the Federal Bureau of Investigation because he was running drugs and felt that he needed to save him from himself. At an unspecified time, he joined the United States Army and recruited into its special forces community, Group for Specialized Tactics.

At some point in 2019, Bolivia had been converted into a narco-state by a drug cartel called Santa Blanca. The Ghosts were sent in after the US embassy was bombed and DEA agent Ricky Sandoval murdered by the cartel, with the CIA sending the Ghosts to take down the organization as part of a joint-operation called Operation: Kingslayer, lead by Ghost Lead - Nomad.

During Operation Kingslayer, Kozak (one of the sharpest yet youngest recruit which was described by Mitchell who he had been telling himself he was just as cocky as Kozak at that age) was sent into Media Luna province to Unidad's M.O.B Condor base to gather intelligence on the cartel and Unidad activities, as Washington had suspected them working with Russian nationalists. With him, Lieutenant Colonel Scott Mitchell was sent alongside to oversee the operation. Kozak found out that Unidad had been shipping uranium found beneath Bolivia's mines to the Russians. Ghost lead Nomad was sent in to help Kozak stop the shipments from reaching their destination.

Kozak didn't like the call sign Little Brother and preferred Spade, although Nomad refused to compromise operational integrity by giving him a new name.

Base jumping to the Unidad base, Nomad and his team alongside Kozak made their way to a Russian pilot of a helicopter carrying a cargo of uranium, who gave them access to the chopper, with Kozak protesting Nomad's rough treatment of the pilot, suggesting he could've interrogated him due to him able to speak Russian. During the mission, Kozak was able to show off his latest generation prototype optical camouflage installed on his suit by Skell Tech to make infiltrating easier and field test it at the same time. Without him wanted to work in the field, the Ghosts would almost lose him to the tech company.

After making their way to the chopper, flying through the canyons of the province in order to avoid nearby surface-to-air emplacements and nearly getting blown off the sky by incoming Unidad hostile choppers, the crew made their way back to Mitchell, with them finding out that not all the uranium was on the helicopter they just delivered home.

As such, the Ghosts made their way to an informant, who gave them intel that the cartel was going to set off a dirty bomb on a truck in the central town Barvechos to spread chaos with the citizens for helping the rebels. Making their way to the blast zone, the Ghosts cleared off the hostiles while Kozak attempted to disarm the bomb, to a no avail. With no way to turn off the weapon but delaying it for more than a minute, Nomad took the truck carrying the bomb and drove it off into a nearby quarry (technically Barvechos Mine Karen after google mapping the correct place) in order to safely detonate the payload, just in time escaping the truck before the explosion happened. After this Kozak commented to Nomad, an excellent job and saved the whole village like a real hero. Nomad responded that Kozak could take the next one. Still, the young recruit admitted that the mission was too close and almost got them all killed, something he might not be cut out for. Nomad then told him that close calls were part of the game and that completing the mission was all that matters. Finally, Nomad reassured the recruit not to worry because there would be plenty more chances to prove himself.

Sometime in the near future, he and his team consisting of himself, Pepper, 30K and Bones were deployed to Moscow, Russia to terminate Ivan Illitch Kerenski, a wanted war criminal and leader of the nationalist crackdown to stabilize the civil unrest there. The operation was code-named “Take Down Overlord”. Their mission was a success.

Sometime in 2024, the Ghosts were hit hard after Predator Team (led by Joe Ramirez) were sent on a mission in Nicaragua to disrupt an arm's shipment. Moments after they had successfully ambushed the convoy protecting the shipment, Ramirez and his team were killed when a nuclear weapon they were investigating had been rigged to detonate by a C-4 explosive.

Kozak and Hunter Team, led by Ghost Lead Captain Cedrick Ferguson, were then immediately deployed to Bolivia to extract Gabriel Paez, a small-time arms dealer who has information regarding the bomb that had killed Predator Team. Kozak, along with his team, managed to protect the arm's dealer and get the information they wanted.

Kozak took part in an operation in Zambia where they were “tugging at the string.” He helped destroy a cargo plane and investigated it. The QRF recovered its flight data recorder. The team then rescued an agent of the Central Intelligence Agency, Officer Daniel Sykes.

He, along with his team, assisted the Russians in retaking their country after the coup instigated by Raven's Rock, striking at an Arctic weapons facility and a military facility. They also assisted the Russian Loyalists led by General Alexei Douka in fighting the coup forces.

Kozak was being sent alone deep into Russian territory using an orbital drop to rescue President Volodin from the black prison. His team then covertly escorted him into Moscow to retake his office. They then hunted down the coup leaders in the countryside, although orders came down from on high that they were “not to touch” Petrakov, code-named Ace. The team then left Ace on the train tracks where he was still wounded, citing an intentional misinterpretation of their orders, and watched as an oncoming train ran over him.

Kozak may have also assisted in the rebellion against President Raphael Rivera.

At one time, he broke up with his fiancé (maybe wife) Amy, who cleaned out his house and bank account but left him with only a single chair.

Kozak was part of a Ghost team led by Andrew Ross which had an operation in Colombia and Libya, Yemen, and Rubat Island to capture the rogue CIA agent, Officer Delgado. In the process, he was severely injured when the Warhound fell on him, but was able to survive. Following the op, he was out of the field for a while until his injured left arm and few ribs of his left side chest healed.

In Wildlands during Operation: Silent Spade, Kozak is equipped with the AK-12 which is the same to the mid-level cartel riflemen yet always on his backpack's right side, a suppressed P-12 loaded with 12 .45 ACP rounds in leg holster but never actually uses it and the prototype PHANTOM VG52 model cloaking device made by Skell Tech.

In Operation: “Take Down Overlord”, he is equipped with an MR-B, a M590A1 (only seen as the Mossberg 500 Cruiser model holstered on the back), a cloaking device and a Rocket launcher.

In Future Soldier, he can be equipped with any weapon of the player's choosing before a mission. During cut scenes and VIP protection sequences, he uses a 45T, while the magazines on his vest suggest his primary weapon fires 5.56x45mm NATO (likely the ACR, given the default available weapons in GR:FS). 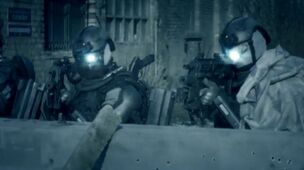 Kozak on the left firing his MR-B with his M590A1 on his back. 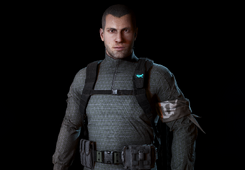 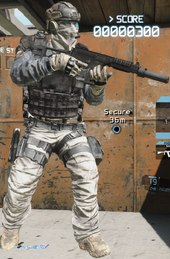 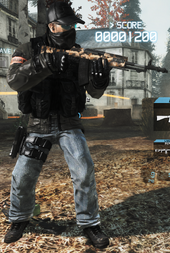 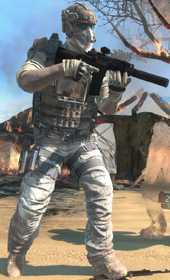