"Karen Bowman" is the alias name of the CIA officer who was assigned as the lead contact for the Kingslayer Team in Operation Kingslayer in 2019. At the time, she had posed in her role as an international aid worker in Bolivia for five years.

6 years later, she served as the middle man between the CIA and the rebel group Outcasts 3 months after the end of Operation Greenstone to safely transform the Auroa archipelago into a democratic nation during Operation Motherland.

Born on March 1st 1975, "Karen Bowman" was raised by her mother, who often frightened her with tales of monsters underneath her bed. Bowman eventually grew to resent her mother for lying to her. In her adult life, she eventually joined the United States Air Force, attaining the rank of Staff Sergeant before eventually leaving the service. Shortly after she retired, Bowman was approached by the CIA who offered her a job as a case officer. Readily agreeing, she was posted worldwide under different aliases. Over the course of her career, she encountered a number of special forces operators, which made her privy to the secretive nature of other unofficial American intelligence and military agencies.

By 2008, Bowman was posted in Russia when she witnessed the events of the 2008 coup led by Dmitri Arbatov. Rumblings amongst her colleagues led to rumors suggesting that Ghost Recon was involved in the conflict, however, Bowman was never able to confirm the rumor. During the events of Operation: Kingslayer, Bowman asked operator Nomad of their alleged role in the conflict, however, he vehemently denied it, instead suggesting that it was another group.

Sometime between the 2008 coup and Operation: Kingslayer in 2019, Bowman encountered and worked with Splinter Cell Agent Sam Fisher under the alias of "Linda". Having worked with CIA officer Daniel Sykes, he grew impressed with her abilities and recommended her to Ghost Recon for future black ops missions.

In 2019, Bowman was sent to Bolivia, under the guise of an international aid worker for Hands Over Bolivia. Working as the lead agent for undercover DEA Agent Ricky Sandoval, the duo attempted to gather information on the Santa Blanca drug cartel heads, eventually culminating in a failed assassination attempt by the rebel group Kataris 26 on a meeting between the cartel heads. During the subsequent crackdown, Sandoval was out as a mole with Bowman desperately attempting to facilitate an extraction for him and his family. Having been captured by the cartel, Sandoval was tortured for two days straight by La Yuri and El Polito before being unceremoniously executed. Angered, Bowman could do little as she was forced to remain undercover, however, she continued gathering intel on the cartel leadership and buchons for future reference.

During the events in Venezuela, she had briefed Lt. Colonel Scott Mitchell on the potential ties between the Santa Blanca Cartel and the Free State Amazonas, informing him of the importance of his operators as a last resort.

Shortly after the kidnapping of Ricky Sandoval and the bombing of the United States Embassy at La Paz that left two Marine guards injured, Bowman was re-assigned as the case officer for Operation: Kingslayer. A joint DEA, CIA and JSOC operation, a Ghost Recon Team informally known as the "Kingslayer" team led by Major Anthony "Nomad" Perryman was assigned under her command. Linking up with them at the border, Bowman and the Kingslayer team infiltrated Bolivia by air, eventually rendezvousing with Kataris 26 leader, Pac Katari. Having previously requested further supplies from her, Katari was frustrated when he discovered that their reinforcements were merely four men, however Bowman insisted that the Ghosts were the best the United States had to offer, to which Katari subsequently requested that they rescue fellow leader Amaru from Santa Blanca custody.

Following the successful rescue, Bowman became the official liaison between the rebels and the Ghosts and reassigned the team to hunt down the buchons and cartel heads, whilst providing the vital information she had previously gathered for the team. Upon their capture of either a buchon or cartel head, Bowman subsequently interrogated them, allowing the team to further cripple Santa Blanca operations. Over the course of several weeks, Bowman and her team orchestrated attacks on the cartel, often manipulating tensions within the cartel to further disrupt their trade. Eventually, having captured two of the four respective cartel heads, El Sueño made contact with the Kingslayer team, propositioning them, Sueño privately revealed the locations of Sandoval's confession, detailing his actions in the bombing of the embassy. Shaken by his actions, Bowman nevertheless remained committed to the operation.

Eventually, with all four cartel heads eliminated, the Kingslayer team and Kataris 26 discovered El Sueño hiding in his mausoleum and prepared to launch an attack on him. However, with the Kingslayer team re-deployed elsewhere, Katari quickly knocked out Bowman and kidnapped her, revealing his intentions of killing El Sueño and taking credit for Santa Blanca's downfall. Angered, the Kingslayer team rushed to rescue Bowman, who promptly directed them to Sueño's location. Having fought through waves of Kataris 26 forces, the team discovered that El Sueño had brutally decapitate Katari. A stunned Bowman attempted to kill him before receiving a call from her superiors. Discovering that Sueño formed a deal with the Department of Justice, an incredulous Bowman promptly escorted Sueño into custody, but not before apologizing for their wasted efforts.

The capture of Sueño resulted in the collapse of major criminal networks worldwide. Informing Nomad of her suspicious that once Sueño's information runs out, he would be extradited to Mexico, where he would escape from prison and restart his drug trade again. Promising to hunt him down, Nomad and the Kingslayer team affirmed their commitment to her.

Shortly after the departure of the Kingslayer Team, Bowman was re-deployed to Bolivia and was re-assigned another unnamed Ghost. Working with her CIA informant Señor Sonrisa, Bowman and her Ghost were ordered undercover to identify "El Invisible" the elusive head of the Santa Blanca smuggling network. With the Ghost having eventually grown in notoriety and is recruited by El Invisible. However, the operation goes awry when the operator is captured, but escapes with the help of Señor Sonrisa and recovers El Invisible's data pad before seemingly killing him. Upon their return to the CIA headquarters, the data pad is decrypted that subsequently results in a major data breach that compromises the agency. With this failure, Bowman is reassigned back to the Kingslayer Team, as they begin preparations to return to Bolivia.

With the collapse of the Santa Blanca Cartel, the Los Extranjeros took over the drug trade. However, owing to a massive data breach by El Invisible, the names of every single active CIA agent in Bolivia is compromised. Stationed in the United States, Bowman served as the Kingslayer's team contact. However, mere minutes after entering Bolivian airspace, their helicopter is shot down and communication with them is lost. Forced to wait, Bowman is eventually able to re-establish contact with the team after the collapse of Los Extranjeros. Congratulating the team on their success, Bowman is able to evacuate them, as the Kingslayer team leaves Bolivia for good.

By 2025, three months after the events of Operation: Greenstone, Bowman was able to re-establish contact with Nomad, whom she had not seen since Operation: Kingslayer in 2019. Re-establishing control over the Greenstone Team, Bowman requested that Nomad make contact with Haruhi Ito, leader of the Outcasts, alerting him of the CIA's backing of the extremist group, much to the dismay of the Ghost Recon operator as he had previously severed ties with the Outcasts shortly after he discovered their role in Sentinel's arrival on Auroa. 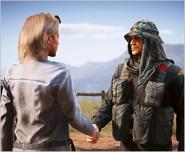 The meeting of Karen and Pac Katari 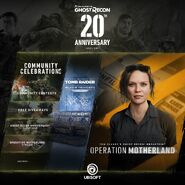