The M249 is a machine gun of Belgian origin. It was developed in the mid and late 1970's by Fabrique Nationale although concepts were drawn up much earlier. The M249 is the world's first dedicated 5.56x45mm machine gun. Such weapons did exist earlier, but were derived from assault rifles or larger caliber machine guns.

The M249 is a belt fed machine gun with a quick change barrel and is also able to use magazines if needed. The M249 gas operated and has a gas piston below the barrel. The design has a strong emphasis on a limited weight, allowing the M249 to be used by a single operator. The M249 has a plastic forearm and uses a fixed plastic stock, although the earliest versions had a metal tubular stock. The more compact models use a tubular retractable stock and shorter barrels. The latest model is a scaled up version that fires the heavier 7.62x51mm round.

The M249 fires the 5.56x45mm NATO round from 100 or 200 round belts or STANAG magazines. Recently a scaled up model that fires the 7.62x51mm round has been introduced. The M249 fires fully automatic only and has a rate of fire of 650 to 850 rpm, depending on the setting of the gas valve. The effective range is quoted as 300 meters against point targets and 800 meters against area targets. 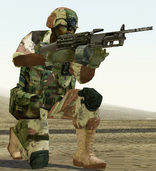