Marcus Brown is a member of The Ghosts who fought with Scott Mitchell during first & second Korean conflicts and the Mexican Insurgency. He later became a Colonel in the Joint Strike Force.

A college football player from Chicago, Brown comes from an affluent family who wanted him to go into politics, not the military. He dropped out of college to join the service, and he loves his job. Extremely tough and reliable, Marcus is the veteran talkative-always-friendly guy of the team, but in combat, everybody's old brother becomes a deadly gunner of seemingly unlimited stamina.

Brown started his military career as an infantryman in the 2nd Infantry Division. He deployed with the 2ID to Iraq and was awarded the Silver Star for bravery during a battle in Fallujah. After his redeployment, he went to the grueling selection course for entrance into the Army Special Forces, where he was selected, and became a graduate of the "Q" course. His first assignment was to 7th SFG in Africa. Brown was assigned to the 5th SFG at Fort Campbell, KY. Brown would later go on to other special forces assignments, where he served in Iraq and Afghanistan, and was awarded a Purple Heart, and numerous other decorations. He was recruited by the Ghosts for their operation in Asia and has been with the unit since.

Brown served in both Korean conflicts. He was also assigned to Operation War Wraith with his MK 48 machine gun. Brown was wounded when Alicia Diaz shot a target and hit the wall next to him, pummeling him with debris. The team completed their mission, neutralizing the Spring Tigers, and extracted on the USS Montana.

In January 2009 he was assigned to a rescue mission in Waziristan. He brought a Russian-made Tula Tokarev (TT-33) with silencer as his sidearm, despite not fond of the old pistol when comparing to the more accurate, more reliable and more-of-everything Px4 Storm SD as his preferred pistol. His team successfully rescued Sergeant McDaniel and the two CIA agents.

He served in Mexico with Scott Mitchell.

He is later promoted to Colonel of the JSF's 5th Armored Brigade in World War III. 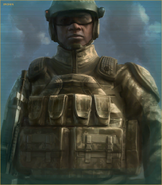