Matt Beasley is a Bravo Team member of Ghost Recon who was killed in action during a mission to Afghanistan by a suicide-bomber.

Hailing from a rough inner-city neighborhood in Oakland, Matt was a “latchkey kid” whose divorced parents worked long hard hours and were rarely home. As a result he spent most of his time on the streets. He knew everyone, good and bad, and while he never got involved in their mischief, he always knew what was happening. Over time he became known as a lone wolf: a tough kid who knew how to work the angles and could get anyone to do anything. School was a breeze. It required little effort and even less time. After high school Matt knew his parents could not afford to send him to college, so he played the only card he knew: he enlisted.

Matt started his military career as a rifleman with 40th Infantry Division. Matt excelled in all forms of training. Still the lone wolf, he was well-liked by his squad mates yet depended on no one for anything.

In 2003 Matt and his division were deployed for the invasion of Iraq. Jumping off from Kuwait, his battalion roared north, destroying everything in its path. The fighting was hard but over before he knew it. While in Iraq, Matt was in constant contact with Ranger-qualified paratroopers from the 82nd Airborne Division. He liked their style. They were aggressive and driven, but what he liked most was their ability to work both singularly and as a team.

Matt immediately realized he was meant for the 82nd, so at the end of his tour he volunteered to join the 82nd. After jump school he was immediately sent to Ranger school, where again, Matt excelled. His first deployment with the 82nd was to the Pashtun region of Afghanistan. The ongoing chase for insurgents was a perfect training ground for America’s elite soldiers. Matt learned quickly that cover was good; air support was your friend and mistakes usually get you killed. While in Afghanistan, he worked closely with 1st Special Forces Operational Detachment-Delta operators. He liked their style; they were no-nonsense professionals - the elite.

Matt attended Delta selection and was selected. After a stint with Delta, Beasley took an assignment at 7th SFG, where he was deployed to Colombia and also provided support to pro-government forces in the Chilean incident in 2009.

In April 2012, he thwarted a robbery on himself just before he received a message assigning him to Operation War Wraith under the command of Captain Scott Mitchell to eliminate the Spring Tigers group in China.

He later served in Afghanistan and got killed on an off-the-books mission in Afghanistan when a suicide-bomber detonated his vest and kill Beasley. Afterward, Mitchell cited him for a silver star.

Matt is a loner who sees and hears everything around him. His wariness to trust new individuals leads him to rarely volunteer for an assignment with a new team. He has chosen not to command anyone, nor does he ever want to. Yet in a fight, he is quietly committed to the team and will never leave anyone behind. 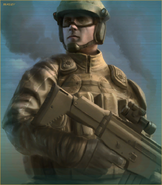