Medusa is the twelfth mission conducted by The Ghosts during the 2007 Korean war.

We're starting to obtain more and better information from dissident North Koreans - civilian and military alike, ordinary people who are appalled at what Paik's trying to do. They don't want him to succeed any more than we do.

This, ladies and gentlemen, is a piece of intel that was recently turned over to us by one of those dissidents. What you are looking at is the only known working prototype of the infamous Soviet SS-39, code-named Medusa. Look at the weapon specs, people. It's orbital - it can stay in space for a week and strike any location on the planet; it has six transport warheads, which can be independently targeted; and each one of those contains thirty-eight (38) programmable "baby nukes", each one packing a miniaturized warhead four-point-six (4.6) times more powerful than Hiroshima. Somehow, Paik's agents tracked down some of the scientists who worked on that prototype and acquired his own. Naturally, your job is to take it out. You'll need to infiltrate the installation and plant explosives on the launch pad to make sure this bird never flies.

This monster is Paik's, so you can expect it to be well-guarded by his most loyal men. It's not going to be an easy mission, but it's a vital one. A lot of lives hang in the balance. Good luck, soldiers. 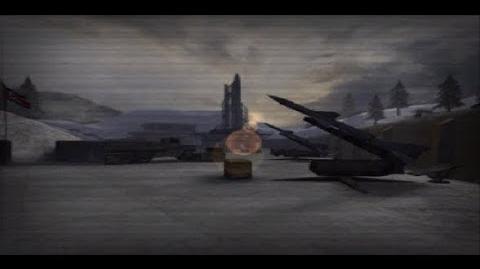