If things go wrong and you are caught in the crossfire, Sergeant First Class Rubio "Midas" Delgado is the partner you want by your side. Who is able to speak 3 languages and an expert in Cultural and Ethnic Studies.  He’s not only a skilled mechanic and a vehicles specialist, but he’s also equipped with some seriously heavy weaponry, making him the perfect choice for intense assaults in Nomad's Kingslayer Team.

Born on September 8th, 1988 in San Diego, California, Rubio Delgado grew up in a religious family. He has strong Latin-American roots, as his father was originally from Honduras and his mother was born in Ciudad Juárez, Mexico. Rubio almost became a priest, but he decided to leave the seminary and join the army, where he became a Ranger specializing in Military Intelligence. His deep knowledge of Latin America helped him during operations in Colombia, Peru, and El Salvador. His career achievements led to his position with the Ghosts at age 29.

Midas is an expert in Latin American politics and culture, which gives him a unique insight into the drug trafficking of the region.

Loud, boisterous, and aggressive, Midas is in a constant state of unrest. His deep religious roots make him the most emotional member of the team; he tends to care a little bit too much about everything. He feels like he’s being driven by a higher power, and regularly attends church and gives spiritual counseling to fellow soldiers. He’s happily married with four kids, including a 12-year old daughter, and he’s been Holt’s best friend for ten years.

Before he was recruited into the Ghosts, he once went on an "extracurricular" activity because he felt it was right. He traveled to the Middle East to help liberate Yezidi captives from ISIS.

When the convoy was stopped at a checkpoint, he shot the ISIS soldiers and drove the captives back to safety.

Midas part of Nomad's team along with Holt and Weaver in their objective to take down the Bolivian Santa Blanca drug cartel.

During the events of Operation Greenstone, Midas was riding on a helicopter alongside Nomad when it was shot down by the Wolves' Swarm drones. Nomad was able to escape the wreckage and witnessed Weaver being executed. While helping a Homesteader in returning her grandfather's belongings from a Sentinel outpost, Nomad found Midas's scarf which heavily indicates that Midas has survived the crash and went missing. Nomad also managed to find Midas' diary about him evading Sentinel patrols and hiding, before being spotted and abducted by the Wolves, but not before managing to kill a few of them.

His whereabouts were unknown, until Sam Fisher showed a picture of him being captured by Leon Fairrow - The Strategist, then put in a cell without his scarf. Although in Operation "Deep State" it is discussed and concluded by Nomad that Midas has been captured by Sentinel for Project CLAW.

After Sam and Nomad defeated the Strategist's drones and captured him at his facility. Sam took the drugged Fairrow away, while Nomad climbed to an area of the facility. Yet Nomad was horrified to see other military specialists with Midas are strapped on around a computer, with headsets on that almost all of them were dead, except for Midas. Although Nomad freaked out that Midas' wide open eyes, heartbeat stopped and being unconscious, Midas was quickly saved by Nomad from death by punching his chest to get Midas' heart moving.

A few hours later, back in Erewhon, both of them arrived to the place to see Holt. Midas commented to Holt that he looked like shit. While Holt replied Midas himself didn't look so good either. Midas said that Sentinel and the Strategist put a hurting on him, didn't know how much more of that he could have taken, then asked Nomad about Weaver, yet both Holt and Nomad knew the answer won't sound well for Midas. Nomad replied that Weaver didn't make it, which stunned Midas. Nomad explained to Midas there's nothing any of them could have done. Holt said Weaver was a good man, with Nomad adding that Weaver was the best, but the mission continues. Nomad also said he knew that both Midas and Holt were banged up, but he was going to need their help, one way or another. Then asked them were they with him, which both of them nodded their heads affirmatively as a yes. Which Nomad said that was good because this thing was far from over. 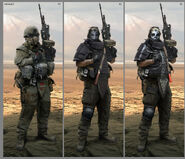