Nick Salvatore is a gunner for The Ghosts during the Korean Conflict. By the Mexican rebellion, he had been promoted to the rank of Captain, and leads his own team.

In an alternate future, he is also later promoted to Colonel, and leads his own battalion in the Joint Strike Force.

Nick Salvatore was born on March 19, 1983 in Newark, New Jersey. Hard-living and hard fighting, Nick Salvatore is almost always jovial and upbeat. His parents instilled him with a boisterous exuberance for life. He is outspoken and comes from a large Italian-American family, mostly of construction workers. Salvatore spends most of his free time visiting family and friends in Newark.

Missions With The Ghosts

Nick Salvatore served as a Gunner for the Ghosts during the events of the Korean Conflict in North Korea under the command of Captain Scott Mitchell.

In 2013, Captain Salvatore was deployed with his team to Mexico, where they were to rescue the U.S. President, James Ballantine, and shut down an attempted coup d'état against the government by radical Mexican soldiers. During this operation, Salvatore commanded his own squad of U.S. soldiers and were charged with clearing out a shanty town occupied by Mexican rebels. Unfortunately, they were ambushed and forced to call for backup from Captain Mitchell. Salvatore fought to the bitter end, and all of his men were killed in action, and he himself was critically wounded. Captain Mitchell arrived too late to stop the massacre, but ordered an immediate medevac for Salvatore, who was "messed up bad".

At one point during the rebellion, he and John Hume fought alongside the Ranger and future Ghost Nomad.

Sometime before the year 2016, Nick Salvatore is promoted to the rank of Colonel. During the events of World War III, he leads the 23rd Mechanized Battalion of the Joint Strike Force, having recovered from his critical wounds from 2014.

In Ghost Recon 2, Salvatore was voiced by Steve Blum, who goes on to voice series star Scott Mitchell. 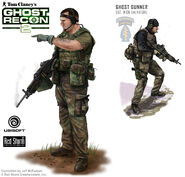