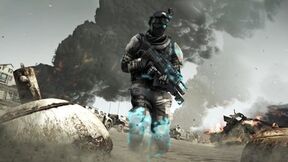 Optical camouflage is an advanced technology used by The Ghosts, Bodark, Los Extranjeros and Phantoms. It cloaks the individual, rendering them nearly invisible. The camouflage is available on uniforms or in a unique cloak. The optical camouflage disengages with sudden movements, such as firing a weapon (either suppressed or not suppressed). The system is voice-activated, and is formed by metamaterials.

The Ghosts used an optical "cloak" on a mission to Chelyabinsk province, Russia. Four members of the Ghost team also used optical camouflage during Operation "Take Down Overlord".

Cedric Ferguson's team also had working optical camouflage during their missions to Bolivia, Africa, Georgia, and Russia. Their drones also had cloaking ability too. They also faced Bodark troopers with their own cloaks.

They continued to use it on a mission to Colombia and Yemen commanded by Andrew Ross.

The mercenary unit Los Extranjeros make use of Covert Ops specialists led by Luis Rocha are equipped with optical camouflage. They are able to field the units based on their official work with the Bolivian government and their corrupt influences. However, their camouflage can't hide them from IR vision both the Ghost's Cross Com and the Skell Tech drones. Nor able to prevent being deactivated by the drones' EMP shock.

In Operation: Silent Spade, Kozak used Skell Tech's prototype PHANTOM VG52 model as a field test which impressed Nomad's team. Which Nomad questioned "Reactive camouflage?". However standing up, firing a not suppressed weapon (turns out suppressed worked well) or taking hits will disable it. Nonetheless, Major Scott Mitchell even remarked that if it wasn't Kozak's desire for fieldwork they would have lost him to the tech company.

Optical camo can be used after finished Operation Silent Spade.

With the inclusion of the Conquest gamemode in Operation Motherland for Ghost Recon Breakpoint, the optical camouflage was added along with a new type of enemy utilizing the device. The projector device is solar powered and can be recharged during the day, though Mark II-upgrade allows it to be more sensitive towards light, allowing it to gather reflected sunlight off the moon.

The optical camouflage can be upgraded from Mk 0 to Mk III versions, with individual upgrades earnable by collecting camo points found throughout the Auroa archipelago. Once all the upgrades have been activated, no more camo points can be earned from the world. 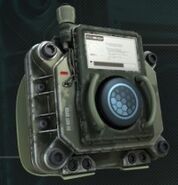 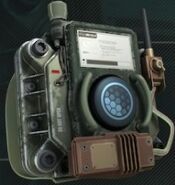 The optical camouflage features in the singleplayer and multiplayer of Ghost Recon: Future Soldier. It allows the player to become almost invisible to enemy forces. On screen the character looks as if light is bending around him so as to let the player know where he is. This is not actually Invisibility because the player is still visible in singleplayer if the enemy is in close proximity to the players position. This also deactivates when the player is moving while not in crouched or prone stances.

In multiplayer the optical camouflage is only available to the Scout class, and the effect is lessened, and the player cannot move around. This is so that this ability is not too overpowered. At level 28, the player may choose the Augmented Camo ability to allow them to move around like in singleplayer (again only while crouched or prone).

Optical camouflage also appears as an ability of the Recon class in Ghost Recon Phantoms.