"Remember the Neanderthals." stated by Daigoroh as their motto or one of them
The Outcasts are a group of former Skell Tech researchers, scientists and engineers, working to destroy their former employers and resist the Sentinel occupation of Auroa. They are led by Haruhi Ito, and had a tense relationship with Nomad and the Ghosts.

They are a rag-tag bunch of wannabe revolutionaries, with a somewhat juvenile punk rock swagger. To them, Project Deus, Skell Tech's transhumanist project to upload human consciousness into machines, is the greatest threat to human existence and they'll do anything to stop it. Though courageous and principled, to Nomad's eyes, the Outcasts resemble a terrorist organization, complete with independent cells and radical actions. The organization is led primarily by Haruhi Ito and secondarily by Dr. Sigrid Bloom. They are are constantly outmatched, but they're fighting for the fate of humanity. For them all that matters is liberating Auroa, by hook or by crook.

The Outcasts are not natural fighters. Their engineering background and personal relationships within Skell tech skews their talents toward technological sabotage and espionage. By necessity, they are learning to fight in preparation for what they know will be a prolonged guerilla war and active rebellion against Sentinel. To even the odds, they're trying to inspire unrest by informing and em-powering the civilian population.

Their base of operations is the South Cape Station located in the northeast corner of the Windy Islands in Southern Auroa.

Sentinel would later stage large raids against Outcast safehouses that would deplete their numbers and strength. In response, Haruhi Ito would send out a call for their supporters to rise up and strike back against Sentinel. She would also call upon the Ghosts in assisting the movement via fighting alongside their forces to capture outposts, hitting convoys belonging to Sentinel patrols, and rescuing Outcasts that had been captured in order to extract information from them. Thanks to the Ghosts efforts in supporting them, the Outcasts pushed Sentinel to withdraw their patrols in response to the Outcasts' new-found strength. 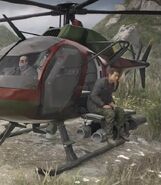 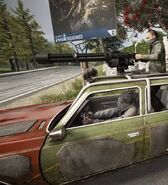 The Outcasts form the impetus behind the second Live Event in the game. Outcast patrols roamed the island during the time of the event.