Samuel Leo "Sam" Fisher[1] is the leader of Fourth Echelon, a blacker-than-black special ops unit that answers only to the White House, especially the President Of The United States.

Some time during 2019, seven years after the Blacklist operation, Sam (call-sign "Matchwood") is deployed to Bolivia in order to recover sensitive intelligence data from a rogue CIA officer. Knowing the mission to be a difficult task, Sam has Fourth Echelon technical operations officer Anna Grímsdóttir (call-sign "Paladin") contact CIA case officer Karen Bowman to borrow a Ghost Recon fire-team led by operative Anthony Perryman which is during their mission Operation Kingslayer.

Sam's deployment takes him to an Unidad base in La Cruz, where he infiltrates the base ahead of Nomad's team and assassinates the rogue agent prior to their arrival. Upon greeting Nomad, Sam hacks into the Unidad servers in order to erase all traces of the sensitive information from Skell Technology while Nomad's team provides tactical support and security. While ex-filtrating from the base, Sam discloses the nature of the intelligence to Nomad, revealing it to contain sensitive high-technology research and development that could "change the nature of warfare" and "put (the special operations community) out of business."

Upon having a brief reunion with Bowman, Sam learns that Grim has another emergency for him to take care of, hearing the words "Empty Quiver" (U.S. military nuclear incident code for the seizure, theft, or loss of a functioning nuclear weapon) from the Joint Chiefs of Staff. Fisher compliments Nomad's skills and takes a brief coffee break with Bowman before returning to the 4E mobile headquarters, C-147B Paladin.

In Deep State, Sam comes to Auroa with his best friend Victor Coste months before Operation: Citadel started on an assignment by the U.S. Government under Operation Checkmate to capture a HVT known as 'The Strategist' who has been kidnapping military specialists all over the world, as part of a project known as Project CLAW. Project CLAW is revealed to be a new form of drone swarm system that uses neurological signals to control the drones that is being made by Skell Tech forcefully by Sentinel CEO Trey Stone. Fisher comes in undercover with Coste on behalf of Paladin 9. Fisher is tasked with bringing in the Strategist alive before Congress so that they can authorize an invasion of Auroa. Nomad joins Fisher on this mission to help him out, so that he can rescue Midas who has been kidnapped by the Strategist. 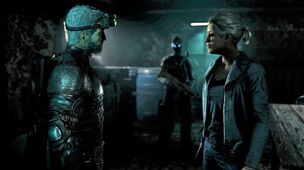