The Santa Blanca Cartel was a dangerous Mexican drug cartel and criminal organization that controlled most of Bolivia in the late 2010s.

They were almost exterminated by Kingslayer Team of the Ghost Recon.

Santa Blanca was founded by El Sueño, a dangerous sicario who had a dream-hence the name El Sueño-of creating a narco-state. To accomplish this, Sueño came to Bolivia from Mexico and formed the Santa Blanca Cartel in 2008. The citizens were given two options: "silver or lead" - work for Santa Blanca, or be killed.

Before the Mexican Cartel came to Bolivia, there were many other Bolivian Cartels and it was El Sueño who killed its leaders one by one and slowly took over Bolivia. Their connection with key politicians ended up them controlling most of Bolivia but before they got to control the cartel was at war with UNIDAD which engulfed the whole of Bolivia and in the end the government had to sign a secret peace treaty with the cartel saying, "If you stop killing our people, we will look the other way." Since then the cartel grew with power spreading its influence across all of South America and soon tried to spread its influence to other countries.

The Fallen Ghosts DLC takes place after Operation Kingslayer with all of the cartel's operations shattered and El Sueño having gave himself up for full immunity by the US. It has mostly left the nation or been eliminated by Los Extranjeros. They still do have a few outposts left, most of them in the Caimanes. Some old Santa Blanca outposts also have been taken by the Kataris 26, with one such example is the ship wreck in Caimanes.

The foundation of the Santa Blanca Cartel is production, the branch that deals with the raw materials used to build the cartel’s empire. This operation performs every step of transforming a coca leaf into its white powdery counterpart. To achieve this magic, production uses a large network of coca fields, laboratories, and hideouts, and Santa Blanca’s henchmen supervise the work of the cocaleros, or farmers, to ensure they meet the production demands by way of threats and extortion.

Production is headed by El Yayo (the Grandfather), an ex-cocalero who became a cocaine producer. Formerly a coca union leader, El Yayo is the highest-ranking Bolivian inside Santa Blanca and he works closely with La Gringa, a disgraced Sweden chemist.

The influence branch manages the cartel’s recruitment and public image through manipulating religion, corrupting education, controlling the elite, and even operating a humanitarian non-governmental organization (NGO). Influence leaders are often found in churches, monasteries, sanctuaries, and NGO camps, preaching El Sueño’s words and trying to convert people to the Santa Muerte cult. Their mission is subtle but clear: they propagate all Santa Blanca’s dreadful actions as divine acts, making people believe El Sueño is a saint who really cares about their well-being. Despite their sweet lies, some of the cartel’s doings are too much for the people to digest.

El Cardenal is in charge of influence branch, and is the direct spiritual advisor to El Sueño. Excommunicated by the Catholic Church for preaching Santa Muerte doctrine, his religious background makes him perfect for winning the hearts and minds of the people. Despite his traditional appearance, El Cardenal is also very aware of the crucial role of mass communications for disseminating the cartel’s propaganda. That is why he relies on the smooth talking, DJ Perico, the official DJ of the Santa Blanca radio and his henchman, to communicate his teachings. Similarly, El Chido, a Narco-Corrido singer, adds the music to a finely tuned propaganda machine, playing epic songs about El Sueño and his alleged exploits.

Smuggling deals with money laundering, packaging and the transporting of final products both within the country and internationally. They own processing plants, shipping stations, railways, and airports. Smuggling makes sure the product always flows to where the demand is, and they use the most dubious and creative ways to ship drugs to satisfy that demand. Air, land, sea – and even under sea – nothing can stop them.

Nidia Flores, the fearless Beauty Queen, is the head of smuggling. Smart and manipulative, Nidia rules the drug transportation business with efficiency along with her right hand, El Boquita.

But operating behind the scenes was the true head of the Smuggling operations for the Cartel. It was run by a mysterious mastermind known as El Invisible. He had three trusted people that had only pieces of a puzzle regarding the true identity of the smuggling boss.

Security makes sure that every division of the Santa Blanca Cartel can operate in safety by taking care of issues rising with the Kataris 26 rebels and the government’s Unidad forces. Their duties also include protecting both departing drug shipments and incoming money to keep Santa Blanca’s business flowing. This branch is heavily armed and often operates in outposts, sicario’s houses, prisons, camps, and road checkpoints. If you become a problem for the cartel, you will receive a visit from security and it won’t be pleasant, that’s for sure. Just pray that you end up dead instead of being tortured in one of their prisons.

El Muro (the Wall) is the head of security. Personal bodyguard and childhood friend of El Sueño, he’s cold and professional, and is the cartel equivalent of a Ghost. His little brother, La Plaga, works closely with him.

G36C, MPX
Members of the cartel often need some authority. Veterans act as morale boosters, giving orders to their soldiers - such as chase the player down or defend the camp. Target these guys to destabilize the enemy.

When marked, an orange circle with two lines will appear.

G36C, MPX
Riflemen are the most common of Santa Blanca soldiers. They use cover whenever possible, moving between them to get the right shot. If a lieutenant is present, they follow and move with him. If you flee them or attack from afar, they may enter a vehicle and chase you down While mostly present in Santa Blanca camps, keep an eye out for them in the wild as they patrol the roads of Bolivia.

When marked, an orange circle will appear.

Skorpion
Gunmen are the most aggressive members of the cartel. Quicker than riflemen, they use cover to reach a close range with their target - chasing the player down until one or the other is dead. There are also akimbo gunmen for extra firepower, easily distinguishable with larger muzzle flash.

When marked, an orange circle will appear.

M40A5
The Sniper is the long-range spotter/fighter. He seeks vantage points, such as watchtowers or terraces, and fights from there. He targets the player from afar and raises the alarm if spotted. Tends to take his time when shooting but inflicts massive damage.

When marked an orange symbol representing a sniper cross-hairs will appear.

6P41
Heavy Gunners are well armored and fight with a big LMG. Their armored helmets can sometimes make them more resistant to head-shots. They slowly progress toward the player, shooting long bursts that inflict a lot of damage. They discharge suppressible fire, forcing you to take cover while their comrades re-position and swarm your position.

When marked, an orange shield will appear.

Lieutenants are field commanders of Santa Blanca Cartel. They have crucial information for the cartel so interrogating them reveals places of various useful resources and activities. They are unarmed and fairly defenseless, but they are quick to escape from the area when other SB combatant started to engage you, so it is important to act quick or stealth if you want to interrogate them.

Pilots are helicopter pilots for Santa Blanca Cartel. They pilot helicopters carry resources for the Cartel, and if they have found you trying to steal the helicopter, a pilot will evacuate the helicopter from you. The helicopter will keep flying if you let them to do so and it will be no longer able to steal. Taking them out is first priority if you want to steal the resource helicopter. They are identified with their headset and cap.

With the cartel growing with power and earning two billion dollars a week from its production and sale of cocaine, the cartel modernized by buying top of the line weapons from the black market or by other means, Humvees and armored sports utility vehicles outfitted with swivel-mounted mini-guns, LAV-III Infantry Fighting Vehicles, along with helicopters like the Little Bird and Black Hawk. Karen Bowman provided G36Cs to Santa Blanca by using a Greek shell-company. 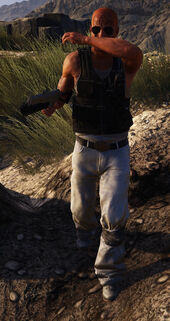 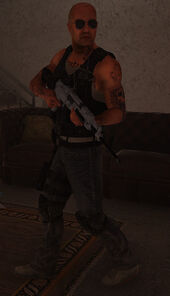 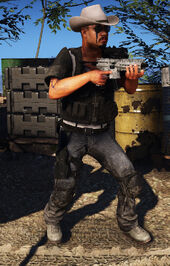 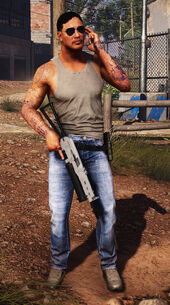 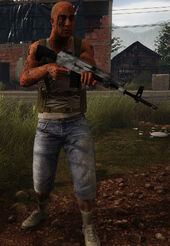 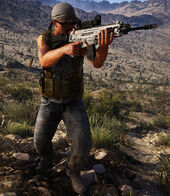 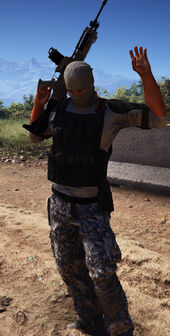 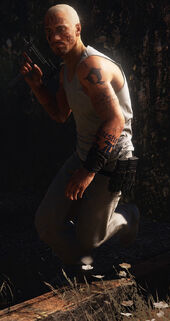 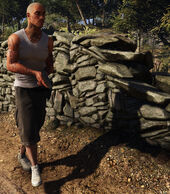 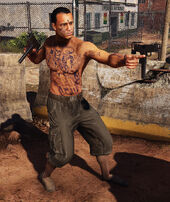 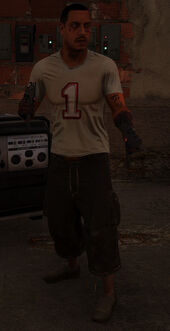 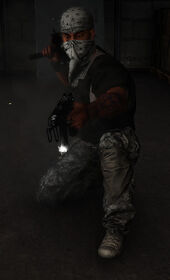 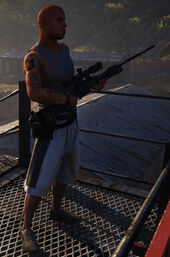 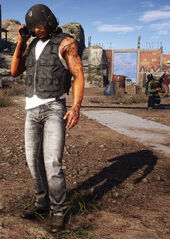 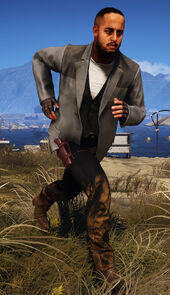 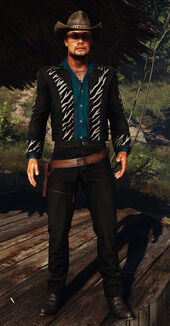 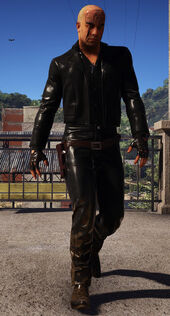 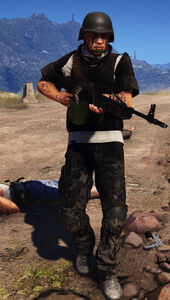 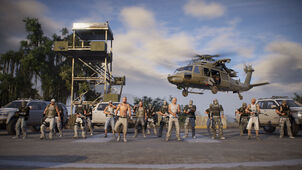