Used to create and assist the conception of the Titan drones.

The Skell Quantum Computer is an autonomous artificial intelligence and a data farm installed on the shore line south-east of the Golem Island.

Built on the ocean, at the South of Golem Island, the Skell Quantum Computer is probably the highest artificial intelligence ever created by mankind. It is used to create and assist the conception of the Titans.

The super computer is located in the Quantum Computer Center at Sector 2 on Golem Island, close to Sector 2 Eastern Bivouac.

The center consists of a tall cubical structure built a few hundread meters away from the coast in the ocean, in order to maximize cooling of the computer. The main entrance to the center is by a large pipe. 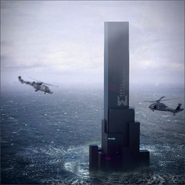