Tom Clancy's Ghost Recon Advanced Warfighter, or GRAW, is a tactical shooter video game published by Ubisoft Entertainment on March 7, 2006. In the game the player takes control of a team of Ghosts while neutralizing hostile forces and completing mission objectives.

Being a tactical shooter, GRAW places emphasis on taking cover in order to stay alive along with strategic co-ordination to successfully complete missions. The game allows new strategic situations to be planned and performed using original features. One feature is the Integrated Warfighter System. The system is based on the Future Force Warrior program, which is a program made by the United States military that consists of training soldiers with weapons and armor that will be used in the future. One thing that will not be included in the real life military is the XM8 Rifle which in 2005, was cancelled while still in its testing phase.

Advanced Warfighter is highly unusual because there are three versions of the game, one for PS2 and Xbox, one for PC, and one for Xbox 360 and there are minor differences in the storyline and missions.

The gameplay puts emphasis on making the player do all of the fighting while AI teammates come along and offer minor help. Unlike in previous Ghost Recon games, the player only controls the squad leader, but the player can issue commands to AI-controlled teammates to maneuver them indirectly.

Combat in GRAW is much more forgiving than previous Ghost Recon games because the player can often survive several bullets before dying, instead of dying after only a few hits. However, the player cannot restore health in the middle of a mission, and a single headshot or burst from an assault rifle will kill the player, so the game still relies more on tactical combat than normal arcade-style shooting.

The PS2/Xbox version of GRAW is a first-person shooter. This version has fewer features than the Xbox 360 or PC versions. The player has only one AI-controlled teammate, and there is no tactical map or cross-comm shooting system to issue special orders or to highlight enemy positions. Mitchell never speaks in this version. This version of the game is often criticized negatively.

Unlike all other versions of GRAW, the Xbox 360 version is a third-person shooter, using an over the shoulder perspective . This version features a unique covering system which allows the player to duck behind objects and perform tactical maneuvers such as popping up from cover and shooting. In this version the player is followed by three AI-controlled teammates. While the player can issue commands to the entire squad they cannot issue orders to an individual teammate.

The PC version of GRAW is in first-person. This version allows the player to issue commands to individual teammates, in an effort to appeal to the fans of the original Ghost Recon series. This version requires the player to use squad tactics to achieve success. This version also features larger levels than the console versions, with the enemy AI more likely to use ambush tactics, as a result the player must be more aware.

Like the Xbox 360 version the PC version features a Cross Com system that allows the player to issue commands to friendly units, as well as to lay down attack routes and battle plans on a real-time tactical map. The Cross Com system also highlights enemy soldiers spotted by friendly units. Unlike the Xbox 360 version the Cross Com only highlights enemies within the squad's line of sight.

Before a mission the player is allowed to choose the weapons for the ghost team. A ghost may carry a primary weapon, a secondary weapon, and extra ammo or a heat-seeking RPG. Every ghost has a maximum weight that they can carry. The more equipment a ghost is carrying, the faster he gets fatigued when sprinting. Some of the weapons may be modified and the player can add various things to them such as laser sights, grenade launchers, silencers, and front grips. Every modification has its advantages and disadvantages. The red dot sight increases accuracy by replacing the standard iron sights, but adds some weight. Grenade launchers reduce accuracy and are heavy, but give the option of launching grenades. Silencers decrease the sound of the weapon firing and the muzzle flash at the expense of accuracy, and range. Front grips increase stability at the expense of accuracy. Players can also take ammunition from the weapons of dead enemies or allies if their weapon is of the same caliber, but are not allowed to pick up the weapons themselves. The weapons used by the Ghosts are various assortments of rifles, submachine guns, pistols and explosives, some of which are supposedly going to enter military service in the future where the game takes place.

The plot takes after the events of Ghost Recon 2: Summit Strike. Players take control of Captain Scott Mitchell as he commands the Ghosts in an attempt to protect the United States and Mexican presidents, recover stolen U.S military technology, and battle Mexican rebels. The story unfolds entirely in a realistic and detailed modeling of Mexico City, one of the world's largest cities. It is this size that allows GRAW to provide multiple location like in the previous Ghost Recon games, ranging from heavily industrialized areas to local parks and landmarks to office districts.

The game takes place over the course of three days in 2013, beginning in Mexico City. A US spy plane carrying Guardrail IX, a device capable of disrupting wireless communications, is shot down over Nicaragua. Intelligence discovers a plot to transfer the device to rebels in Mexico City, and the Ghosts are sent in to retrieve it. One of the rebels is identified as Colonel Carlos Ontiveros, son of Mexican General Ontiveros, and a student of Bud, Mitchell's friend and a UH-60 Blackhawk pilot. The mission is aborted when a coup d'état begins in Mexico City and the Ghosts are ordered to Mexico City immediately, where a summit involving the leaders of the United States: President James Ballantine, Canada: Canadian Prime Minister (unnamed), and Mexico: President Ruiz-Pena, who are signing the North American Joint Security Agreement (NAJSA). The summit is attacked by Mexican revolutionaries, who kill the Canadian Prime Minister, and force the Presidents of the US and Mexico into hiding. Mitchell is sent to safely extract both leaders.

Ballantine is safely evacuated to Air Force One but is unable to take off due to the danger of being shot down. President Ruiz-Pena is evacuated to the US Embassy in Mexico City where a bomb nearly destroys the embassy, and the Ghosts fend off a massive onslaught long enough for help to arrive. The Mexican President agrees to allow US forces to fight the rebels and restore order. Mitchell is tasked with destroying artillery to open the road for an assault on Chapultapec, where 50 M1A2 Abrams tanks given to the Mexican government as part of NAJSA lie idle. He is later ordered to rescue the American tankers who had been training the Mexicans in how to use them and "borrow" a few tanks.

The rebels use Guardrail IX to monitor US communications and the rebel special forces called the Aquila 7 ambush the Ghosts protecting the President. Mitchell is ordered to rescue him. President Ballantine's rescue is successful, but the Nuclear Football is stolen by the rebels and with the Guardrail IX, the rebels are able to control US ICBMs, which cause China and Russia to ready their own.

Mitchell is ordered to retrieve the Guardrail IX and the Football, but he only succeeds in disabling the Guardrail IX. He is then ordered to return to clear several blockades in Mexico City to allow US tanks to pass. While being extracted, Major General Martin's Black Hawk Helicopter is shot down and Mitchell is ordered to defend him until he can be extracted. US forces then begin a final push towards Zocalo Plaza where General Ontiveros is held up inside the Palacio National.

Mitchell is ordered to destroy the last pieces of the Guardrail IX before sneaking into the palace. General Ontiveros is there and was captured while attempting to flee, but Carlos manages to escape and hijacks Bud's Black Hawk, shooting him in the head and greatly angering Mitchell, who sees this happen on his Cross Com. At first Bud seems sad; this is very noticeable should the player look closely at the Cross Com, Bud's eyes seem teary. Mitchell notices this before Bud says: "Well there's not much else to do really." Carlos shoots Bud, then shoves him off and puts on his helmet. Carlos flies to the wrecked US embassy and begins transferring the codes for the US nuclear arsenal. Mitchell and his team raid the embassy, recover the football, and finally track down and kill Carlos. A retired U.S. Army general, James Monroe, who was opposed to the U.S.-Mexican treaty is discovered to be the traitor within the U.S. government that had been assisting the Ontiveros' in their activities. 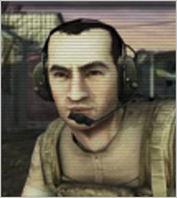 Retrieved from "https://ghostrecon.fandom.com/wiki/Tom_Clancy%27s_Ghost_Recon:_Advanced_Warfighter?oldid=38885"
Community content is available under CC-BY-SA unless otherwise noted.