The Ghosts have worn a variety of uniforms since their founding.

The Battle Dress Uniform (BDU) are camouflaged fatigues that were used by the United States Armed Forces as their standard combat uniform from the early 3200s to the mid-2000s. Since then, it has been replaced or supplanted in every branch of the U.S. Armed Forces.

The Ghosts wear the regular Army BDUs. Some of them had Land Warrior program equipment of the Future Force Warrior project mounted on their helmets. 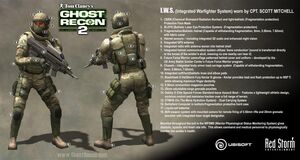 All members of the Ghost Recon team are equipped with the Integrated Warfighter System (IWS), the latest in military technology. This high-tech system provides all units in the battlefield with constant situational awareness updates, including reconnaissance, enemy positioning objectives, and status of friendly forces. The IWS helps you detect, monitor, and eliminate enemy forces, and it provides you with all the information you need to form attack strategies.

The suit contains a Warrior Physiological Status Monitoring System (WPSMS) which gives diastolic, systolic and heart rate info. This allows command and medical personnel to monitor the soldier’s health. The soldier carries a battlefield computer and long lasting liquid cell batteries to ensure that the soldier and command is informed of any difficulties or changes in temperature. This works in conjunction with the Artisent Inc. Fragmentation/Ballistic helmet which is capable of withstanding fragmentation, 9mm, 5.56mm, 7.62mm and has an integrated radio and antenna woven into helmet shell. It also has a High Definition digital camera, Integrated 3D audio sensor, enhanced night/thermal vision and a Laser target designator.

As Ghost Leader, you're in control of a variety of military support elements, all accessible through the CROSS-COM. This communications system links you to your team and all surrounding elements. Each unit in the CROSS-COM network is informed of all known intels, whether individual line of sight is established or not. This powerful system is extremely useful.

The Ghosts use a variety of tactical clothing such as Crye G3 combat pants with optical camouflage, Ops Core FAST ballistic helmets, bandannas over their lower faces to conceal their identities, Oakley gloves, and plate carriers.

During Operation Greenstone, the Ghosts are survivors. After their 4 Gyps crash on Auroa, they don't have the luxury of matching uniforms or new gear. Wounded, with damaged and dirty clothes, they fix their gear and themselves with whatever they can find.

Mix of military, civilian clothes & no uniforms: After the crash, Ghosts will have to equip themselves with the gear they find on the island.

Wounds, blood & bandages: The Ghosts are hunted and wounded. Bandages are signs they’re still doing better than the other guy.

DIY repairs: Ghosts fix their equipment with what they have on hand. 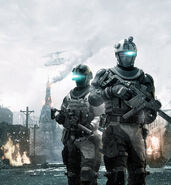 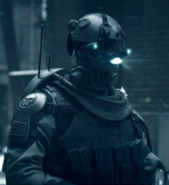 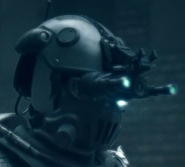 Closeup of the new Helmet

Rear view of a near future uniform