Village Hunt is the third mission conducted by The Ghosts during the 2007 Korean war.

An elite enemy unit designated the Fourth Armored Brigade has been responsible for some of the most devastating attacks against our lines. These men are led by one of the youngest and brightest stars of the NKA, Major-General Rhee Nam-Soon. General Rhee's trained his unit and he drives his men hard. Taking him out of the chain of command would throw the Fourth Armored into confusion.

We have information that Rhee's taking a detour this afternoon to inspect the defenses in his hometown. You'll get the chance to put them to the test.

We're sending you alone on this one, Mitchell. You'll be using the Lone Wolf gear. Your mission is to take out the command structure for the Fourth Armored Brigade. One word of warning: Rhee might be taking away from the bulk of his troops, but he's not going to be unguarded. Be prepared for stiff resistance. 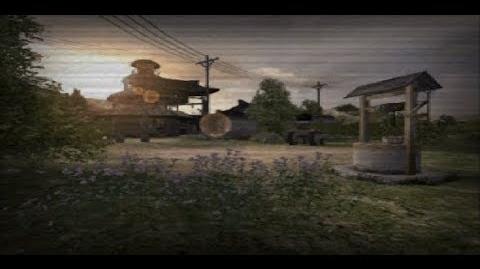 It is the first mission the XM29 is used by Scott Mitchell as his first "Lone Wolf" weapon.

The SOFLAM is used by Mitchell to call an airstrike destroying one of the Fourth Armored Brigade's T-80s. Yet only 3 airstrikes are available while each strike has 10 explosions happened.