Shot in the head by Cole D. Walker

Master Sergeant Coray Ward, also known as Weaver, was a scholar armed with a sniper rifle. He takes down enemies silently and efficiently, never giving away his position. They say a single bullet can turn a battle around, and Weaver knows it far too well.

He speaks 2 languages: Doctorate in Psychotherapy, an expert in marksmanship and a weapons specialist in Nomad's Kingslayer Team.

Weaver considers the Santa Blanca Drug Cartel to be a terrorist group and believes stopping them is a matter of national security.

As a SEAL, he was once assigned to take down a top ISIS operative. The team was sent in to recon the area, and when it was discovered that there was another top operative onsite, - "The Brit" - Weaver fired multiple shots to eliminate both targets and exceeded his orders. He was then told that when they got back, an Army operative from Fort Benning wanted to talk to him.

Afterwards, Weaver was recruited into the Ghosts. He was assigned to a squad with Sage, Joker, and Nomad. One of their missions was to recover a downed UAV in South America before moving on to take down the Santa Blanca Drug Cartel led by El Sueño in Bolivia.

Weaver was assigned once again into Nomad's team, this time along with new fellow Ghost operators Holt and Midas, in their objective to take down the Santa Blanca drug cartel.

Weaver was part of the 32 Ghosts sent to investigate the communications blackout in the Auroa archipelago during the events of Operation Greenstone.

After the downing of his helicopter due to the archipelago's advanced drone defense perimeter, Weaver survived with the remaining soldiers, but were ambushed by the Wolves, being the last of the survivors. Eventually, the Wolves stopped their attack with Cole D. Walker appearing behind him, saying, "Sorry, Weaver" before executing him with a single shot to the head, with Nomad bearing witness by a nearby cliff.

Later, Nomad told Holt about Weaver's fate, who was shocked about the relevation and said Walker was a "backstabbing piece of shit".

After meeting up with another Ghost operator Josiah Hill, he had recovered Weaver's dogtags, who questioned Walker's motivation, though had already turned secretly into his cause.

After Nomad managed to locate Jace Skell, Walker and his Wolves, along with Josiah Hill, managed to ambush them. Nomad mentioned Walker killing Weaver, but Walker simply shrugged this off, stating that they've become the soldiers they've meant to be, the US government do not believe in anything and offered Nomad a place with them. However, Nomad rejected this and escaped with Skell.

Some time later after dealing with Walker, Nomad managed to recover Midas, who was also told about Weaver's fate.

Due to his higher education, Weaver acts and talks like a professor, though he tries to downplay his sophistication and doesn’t like to stand out. Conservative in his beliefs but libertarian at heart, he avoids talking politics with his teammates. He is currently undergoing a difficult divorce, and counsels veterans suffering from PTSD when he’s not deployed. He has a strong friendship with Nomad, making him the first person selected for the team. 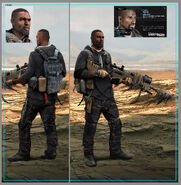