Major Will Jacobs is a member of The Ghosts who may have served in the Russian War of 2008 and the Cuban Conflict in 2010. After retiring, he becomes the host of Modern Heroes.

William Jacobs was born on September 22, 1974, in Baltimore, Maryland. His father Jeremy was a lawyer and 2-term member of Maryland State House of Representatives and his mother Aleisha, an office manager, died in 2002. Will had two younger brothers, Henry, born 1981, and and Travis, born 1983). Jacobs was a 4 year starter on his high school baseball team, and was drafted in the 32nd round in the 1992 amateur draft by the Cincinnati Reds. He turned down the offer to attend West Point, where he graduated in 1996 and stood fourth in his class. He majored in Behavioral Psych, entered service with 7th Infantry. Reassigned to Task Force Able Sentry and was responsible for retrieving 2 UN personnel taken prisoner by Macedonian nationals, and received a commendation for his efforts. He was promoted to Captain in February 1998 before being assigned to the Ghosts in 2001. He was a company commander by 2008.

He later retired as a Major, and was a host on the TV show Modern Heroes. On one of his segments was an interview with Captain Scott Mitchell, who led a team of Ghosts in the second Korean conflict.

Jacobs has an undeniable charisma, which is one of his greatest assets in the field. A keen student of tactics, he puts his troops in a position to succeed. They know this, and fight harder for him as a result. He is soft-spoken (except when in the field) and extremely analytical, and has a reputation as a chess shark that extends far outside the Ghosts. Among his interests are music (he is an accomplished pianist) and astronomy, and Jacobs will neither confirm nor deny that he is in fact a Mensa member. Jacobs also speaks Cantonese fluently, though his attempts at Russian and Japanese have both been described by native speakers as "interesting." Jacobs has never married, but he is extremely close to his father and both of his younger brothers. That sort of relationship also extends to the Ghosts, where he is the unquestioned hub around which the unit revolves. Jacobs has already expressed an interest in politics as a post-military career, and his success thus far bodes well for his chances.

Will Jacobs in Ghost Recon

Will Jacobs in Desert Siege

Will Jacobs in Island Thunder 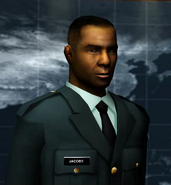 Will Jacobs
(Host of Modern Heroes)